skip to main | skip to sidebar

I am creating this post solely for people who get linked here from profiles I have elsewhere on the web. You are undoubtedly peeved at me about something (or, perhaps, in rare instances, chuckling). Go ahead; let it out. You won't feel better but I know you need to do it anyhow. Flame on.

If you want to dig back into the dark ages of this blog for ammunition or further entertainment, that's your prerogative, I suppose, but it's not going to do you much good; I've been away for quite some time and I'm pretty thoroughly divorced from all prior material posted here.

Posted by Unknown at 2:58 AM No comments:

On her way off the bus, a girl pays her fare and takes a transfer. As she exits, she hands the transfer, unprompted, to a stranger waiting to board. Both of them leave smiling. Both of them ride a bus system supported by fares. A small and beautiful act of personal kindness; a small act of anarchy, of rebellion; a small act of indirect selfishness?
Posted by Unknown at 6:39 PM 46 comments:

In the years after the brief, bright, sooty grease fire that was Dubai burned itself out, its status as a byword for conspicuous over over-engineering gradually transformed into something else; while most of the world forgot the decaying city of megaprojects, the would-be modern Valley of Kings, those who lived in and around it could not forget, and simply did not have the money to flee. The wealth had fled years ago, at the first sign of trouble. Only the mad and poor had remained. There were plenty of both.

Willie Taylor had been sent to Dubai on long-term assignment in the summer of 2006 by an American engineering firm which had gone insolvent and evaporated in the recession of 2009. When his paychecks stopped appearing, he sent a series of increasingly distressed emails to his supervisor and H.R. department; they bounced. His calls were not answered. His ex-wife blocked his number after his first attempt to talk to her. His brother was in prison for dealing meth.

Despondent, Willie had gradually drunk away his savings. One day, early in 2011, he spent two hours at the docks screaming up at a container ship registered out of Cyprus, then collapsed in a nearby alley; when he awoke, he no longer had a passport or any sort of funds or identification.

He took the first job that would have him; a failing megahotel saw the potential merits of a literate English-speaking employee, and hired him on as a janitor and part-time marketing consultant. After extensive consultation, the management took Willie's suggestions for a new ad in Conde Nast Traveler; they were so pleased with his pitch that they gave him an immediate promotion to resident worker in a closet-sized room with running water.

The next week, Willie's ad was seen by the rich, powerful, and merely wistful throughout the English-speaking world.

I used to be a writer.

Oh! the freight contained in that one short, inelegant sentence.

In any case, yes; once upon a time, I wrote significantly more than I was required to by employment or academics. I'm not claiming what I wrote was all that good, or that it ever went anywhere, but I did it.

With that in mind, I'm going to try to publish occasional short fiction pieces here, just to flex my brain-muscles a bit. I promise nothing, but I can say that fiction is likely to be more interesting than anything I might say from life right now.
Posted by Unknown at 8:38 PM 4 comments:

My brain and I haven't been getting along

I came to the rather embarrassing realization today that I have apparently dug myself so deep into my introverted hole that the very thought of being social, in the most general sense of "What plans might I make in service of getting out more and interacting with people?" is now sufficient to drive me into fits of social anxiety. Wonderful. Actual people are no longer necessary, allowing me to cut out the middleman and process anxiety at least 30% more efficiently, possibly even more during off-peak hours when demand for interaction is less.

The contentment of my long relationship - or comfort, at least - appears to have largely kept a lid on the viscous, simmering muck I've allowed to build up in the interstices of my brain not devoted to putting words together in unnecessarily long compound sentences, resenting authority, or memorizing and applying a vast catalogue of facts about beer. With that restraint now removed, I find myself at loose ends much of the time, with very little idea what to do with myself and a great deal of angst about that fact.

I realize this is nothing unusual, mind you; it seems like the majority of people I know profess to being socially stunted in some way or another, and certainly our popular media portray a plenitude of individuals with social neuroses. Nevertheless, it comes as something of a rude shock, and so stands out as an exception in my individual experience. I have always considered myself a bit shy, introverted, eccentric, and intellectual, but basically functional. To suddenly find that, on my own, I possess only a few ragged tatters of a social life and a massive mental block regarding the skills I need to repair or rebuild it has hit me pretty hard.

There are reasons, of course; there are always reasons. In some ways I am typical of my generation, or at least the stereotypes of my generation: broken home, poor relationship with step-parent, raised in ways that were well-meaning but often inconsistent and occasionally neglectful, hereditary disposition toward depression. I was the fat kid in middle school and the awkward loner in high school. I rather expect that if I had lived a few years later, I'd have been on some sort of school-shooting watch list, but Columbine was slightly after my public school tenure. In any case, there were factors in my development that left me feeling both powerless and unwanted, and, behaviorist that I am, I can't discount those as formative influences even though there is a substantial emotional component to my makeup that wants to self-blame for every problem I've ever had.

The fact is, though, that that's all in the past, and I have to live in the present. (I've heard some very interesting discussions on that sort of topic recently, incidentally, not least an interview with Tom Clark, Director of the Center for Naturalism, on Point of Inquiry in which is discussed the illusion of the self, free will, and scientific naturalism.) Yes, I'm temporarily on antidepressants, and yes, I have seen a behavioral therapist in the past and will probably again. I don't like to be one of those people with Issues, and I don't intend to be one of those people with Issues for long, but I'm also not the sort to just ignore real issues - especially not issues that affect those around me. I may procrastinate and I may fail to look out for my own best interest sometimes, but I still know the right thing to do when I see it.

I also, apparently, know how to digress. If ever there was an e/n post on this blog, I guess this is it.

I intend to make myself get out and hang out with people who have fun, even if the things they do don't sound like fun to me. I figure there is certainly room for me to learn.
Posted by Unknown at 7:29 PM 7 comments:

This is a dark time

My friends, I am just now pulling back a bloody stump from the painful end of an eight-year relationship. This is not a good time for me. I consider it a success to get through each day without giving up and losing the will to live. Yes, I am aware that in time, it will suck less. For now, it sucks.

The difference should be virtually unnoticeable to you. I will still not be blogging often. I just wanted you to know why.
Posted by Unknown at 8:53 PM 7 comments:

It might just be observer bias, but it seems like food recalls have become much more frequent over the course of my adult life.

Superficially, this might initially seem like a good thing: finding and pulling contaminated food is better for everyone, right? Well... yes and no, but mostly no.

It is true that it's better to have the stuff that's definitely connected with food-borne illness off of store shelves. It is not true that this is a good sign. It is, instead, a sign that our problems with food contamination are becoming worse and worse.

Recalls, you see, in a manner unsettlingly similar to that described in Fight Club, don't happen as a result of regulation or inspection. They happen after consumer complaints reach a certain critical mass. Recalls are initiated when the number of poisoned customers begins to approach the minimum threshold for the FDA or USDA to take notice.

Without going into deeper detail regarding the manifold ways in which a corporate industrial food system is inherently bad for the health and safety of consumers**, I'd just like to point out that if health and safety were indeed a number one priority, or even particularly high on the list of priorities, it is easily, even trivially within the capability of an entity as large as Nestle to:
The moral of this story is the same old tune that all of us food-conscious bloggers have been singing for several years now, or at least since Eric Schlosser made it visible and Michael Pollan made it hip: don't eat food that's manufactured instead of cooked, and don't believe any claims about food that are made by plastic packaging or plastic people.

* - E. coli 0157:H7, a nasty little bug that has received no little attention in recent years thanks in part to its appearance in Fast Food Nation
** - I refer you not only to Fast Food Nation and The Omnivore's Dilemma here, which are obvious, but also to... well, honestly, I don't know how to hyperlink an entire social movement, for those who aren't already in it. Start with some good news and tips - The Ethicurean - and some good science - look for food-related items at ScienceBlogs (you might consult posts like this or these).
Posted by Unknown at 5:55 PM 4 comments:

This is a silly blog with a silly name about things which may or may not be silly. The rhetoric is there... if you're gonna read it. 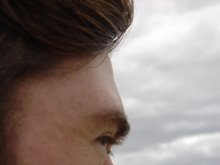 Go visit people I like. In no particular order.